There are no different levels to aspire to in this game, but the continuing challenge is to keep your Norns safe and encourage them to breed to ensure there are enough baby Norns growing up to carry on the game.
If a Norn touches or moves its egg (they often slap the egg!?) it will not hatch so it needs to be taken to the incubator. It is necessary to be vigilant to avoid catastrophe. Some times Norns are prone to step off cliffs in to the sea where they continue to explore but drown, unless they are quickly rescued.
Adopting newly hatched baby Norns, registering their births and taking photos of them, helps engage the player in the game.

When you have the science kit you can inject creatures with liquid food (if they are too stupid to eat) or give them a sleeping draught to make them sleepy, or Diliberum to bring them back to consciousness when they are dying. (Shown by stars around their head) Mostly this makes you want to carry on playing to look after them, but after a while they can get annoying always being so foolish.

http://creatures.wikia.com/wiki/OHSS
OHSS:
“”One Hour Stupidity Syndrome was the name given to a common flaw due to errors in the design of the original release version of the Creatures 2 Norns. The result was that after about an hour of play, the brain of the afflicted Creatures would appear to turn to mush. They would begin to wallbonk and forget important things like how to eat and sleep.
According to Lis Morris, the root cause of OHSS was an imbalance of brain chemicals – specifically, the reward and punishment chemicals. Too much of these chemicals were being generated by the norn’s actions and building up in the brain – the net effect being that the brain was being rewarded all the time, whether or not it was doing something “right”. This made it hard for the norn to learn what to do with an object – as she said:

since decisions were being rewarded more or less randomly, any decision was valid in any situation

Meanwhile, Chris Double concentrated on finding a better way of focusing the norn’s attention on things that mattered. Initially the norn had no way of deciding what to look at based on what it really needed – it could not ignore a bouncing ball or disregard what the hand was saying in order to go eat a piece of cheese.

Lis and Chris subsequently worked together to find a solution to these problems, ending up with the Canny Norns. Their work was also included in the Boney Grendels. “”

These new improved Norns can be downloaded.

The backgrounds of creatures 2 are abundantly detailed, with little touches which are strictly unnecessary, but which add to the delight of playing the game. There are waterfalls and fire that look incredibly realistic. There is a beautiful mountain range in the distance behind the waterfall. Clouds move in the sky, fish swim in the sea and butterflies flit through the environment.
The backgrounds are made up of realistic earthy colours, with lots of different shades of brown, orange and grey. The trees are beautifully drawn and have a good variety of colour in the leaves. There is a tree house and a rope bridge across the waterfall. The rocks look quarried and rugged. The lava in the volcano glows brightly, but the creatures get bone deterioration due to the radiation levels if they linger there. The whole game is eye level, this makes it possible to look at different ground levels at the same time.

The weather conditions, and environment temperature, change depending on the season in the game.There are thunder and lightning storms in which your creature can get electrocuted, showing its skeleton but not killing it. If you use the injector tool to inject Grendal frost, harmless little blue Grendals will appear and make it snow. If the Norns get too cold they shiver and make cute cold noises.

Grendals are Scaly, green and have red snake like eyes.

Ettins are white with red eyes.

Norns (Creatures) Grendals and Ettins were all created by the Shee.
Grendals are the natural enemy of the creatures, although sometimes they befriend them, even mating with them to produce mutants. They have deeper voices than the creatures,and carry diseases that are harmful to the creatures.
Ettins are industrious, and friendly to the creatures.
At first you cannot follow the Grendals or the Ettins, your creatures have to collect an “implement” (A floating circle with a picture of a Grendal and an Ettin) before you can take proper care of them or name them.

There are a variety of other animals that your creatures can interact with: dog, rabbit, bees, ants (Bees sting or ants bite your creatures, causing them to cry a heartfelt “OWW!”)
The environment is filled with the different machines left behind by the Shee. Creatures move between the levels using lift mechanisms, the creatures also use boats and a submarine to get from one island to another.

When your creatures reach the right areas, you can turn on some of the machines and use them on your creatures. For example, the Gene Splicer which uses the DNA from two creatures to make them into a new creature you cannot separate them again.

Creatures eat carrots, cheese, tomatoes, honey,and various other fruits.
Before your Norns die, stars circle above their head and the Norn looks like it is sleeping. You only have a short time when this happens to revive them from whatever ailment they have. If you do not succeed in reviving them they die, the stars disappear and sad funeral music starts to play. The creature then floats into the sky. You can put a photo of the deceased creature and a message on their gravestone.

Creatures 2 is a single player game. You start the game by hatching out a creature egg. You are supplied with 6 eggs and (unlike the first creatures game) when all 6 creatures die you are supplied with more. After the egg hatches out you can name it and take a photo for its birth certificate. They communicate using a variety of cute little noises. You move around the creatures world using scrolling bars to move up, down, left and right. You can only move as far as the creatures have explored.

Creatures can be slapped, or tickled, to punish or reward them. You can teach them to understand simple commands, and they can respond with some basic language in the form of written words in a speech bubble.
The main aim of the game is to keep the creatures alive and to breed them. You continue to follow through the next generations. Each creature has its individual personality, so sometimes you can get emotionally attached to a creature which can be upsetting if it dies. You can collect the Science Kit with which you can diagnose illnesses and administer medicines.

Creatures 2 can be quite challenging. When you have several creatures in different places, it is harder to keep tabs on them, to rescue creatures from harm. Even when the creatures have become adults they still have no common sense or survival instinct, so they often walk straight in to the sea and drown. Although Creatures 2 is a life simulation game, if you do not give the creatures a push every now and again they would stay in the same area all the time.

The game I have chosen is Creatures 2. 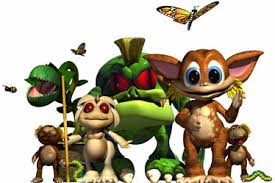 Creatures 2 is an artificial life simulation game, made in 1998, for the PC System by Creature Labs. The Creature Labs company was forced to shut down in March 2003. Creature Labs originally an independent developer, is now part of the development division and brand label for Gameware Development.
There are several creatures games: (Creatures, Creatures 2, Creatures 3, Creatures Village and Creatures Playground all for the PC system. There are also console versions for the GameBoyAdvance and playstation.) It was intended that Creatures would be made for the PS2, Xbox and GameCube, as project Loci, but was cancelled because of lack of funds.

I chose this game because I like the artwork and Gameplay of the game.
The aim of the game is to explore the world of Albia with your creatures which you can name and breed. You guide the creatures through the world; if you don’t watch over them, they can get diseases or drown. I like the detailed environment and the noises the creatures make. The background music changes depending on what is happening in the game (e.g. a creature is dying /an egg hatched)

Creatures 2 Albia is what is left of the world after a volcano erupted so the environment is different from that of the first creatures game. The beings that created the creatures are called the “Shee”, they abandoned the world in search of a new one, leaving creatures’ eggs behind, along with Ettins and Grendals (they are non-playable characters unless your creatures collect a special item.)